Return to list of
Commonwealth documents
Balfour Declaration 1926 (Imperial Conference)
Significance
This document from the 1926 Imperial Conference declares the United Kingdom and its Dominions equal in status in all matters of internal and external affairs. This replaced the principle of a hierarchical relationship with one of 'autonomous communities within the British empire, equal in status ... and freely associated as members of the British Commonwealth of Nations'.

One of many printed copies, this document represents an important step in Australia's path to independent nationhood. This step was based on agreement to this report at the 1926 Imperial Conference, by which the British Commonwealth accepted the principles underpinning the autonomy of the self-governing Dominions. The international recognition of the free and equal status of the Dominion members of the League of Nations was thus affirmed within the British Commonwealth. The law enacting these principles was the Statute of Westminster in 1931, adopted by Australia in 1942.
History
Arthur Balfour was a nephew of British statesman Lord Robert Cecil and his own career in the British Foreign Office is said to have sparked the saying 'Bob's your Uncle!'. He was a Conservative Member of the House of Commons from 1874 to 1922 and succeeded Cecil as Prime Minister in 1902, but lost the 1905 election. British Foreign Minister during World War I, he was a member of the British delegation at the signing of the Treaty of Versailles in 1919, and was made Earl of Balfour in 1922. Balfour was 78 when he chaired the Committee established at the 1926 Imperial Conference to report on Inter-Imperial Relations, and died in 1930, the year before the Statute of Westminster became law.

The Imperial Conference was arranged to follow the 1926 General Assembly of the League of Nations in Geneva in September, and met in London immediately after. The Balfour Committee held 'long and intricate' discussions over 15 meetings from Wednesday 27 October to Friday 19 November. The Committee rejected the idea of a written Constitution for the British Empire, preferring the British model of implicit rather than explicit constitutional guidelines and guarantees. Balfour opened the first meeting of the Committee by stating that the 1914–18 war had left the Empire 'unexplained and undefined' a situation complicated by the role of the Dominions 'in framing and signing the Treaty'.

In the report Balfour wrote that the Dominions' 'tendency towards equality of status was both right and inevitable' and that geographic and historic differences meant that this could not be achieved by a federation of nations within the Empire, but had to be sought 'by the way of autonomy'. Balfour declared that the British Empire

Depends essentially, if not formally, on positive ideals. Free institutions are its lifeblood. Free co-operation is its instrument. Peace, security and progress are among its objects ... And though every Dominion is now, and must always remain, the sole judge of the nature and extent of its co-operation, no common cause will, in our opinion, be thereby imperilled. Equality of status, so far as Britain and the Dominions are concerned, is thus the root principle governing our Inter-Imperial Relations.

Equality of status, so far as Britain and the Dominions are concerned, is thus the root principle governing our Inter-Imperial Relations.

The effects of the report included the recognition of the equal status of legislation passed by Dominion parliaments with British legislation and that the British Parliament would only enact laws applying to a Dominion with the consent of that Dominion's government. Another important statement in the Balfour report was that:

This soon had a direct effect in Australia. Labor Prime Minister, James Scullin, while in London for the 1930 Imperial Conference, recommended the appointment of Sir Isaac Isaacs as the next Governor-General to King George V, rather than following the convention of this choice being made by the King, advised by the British government.

The Balfour report was accepted in full by the 1926 Imperial Conference and thus filled its purpose of laying down the fundamental principles guiding the relations between the countries of the British Commonwealth, and of each to foreign countries.

Zines, Leslie, Commentaries on the Australian Constitution: A Tribute to Geoffrey Sawer, Butterworths, 1977.


Description
Paper pages, bound in a dark blue leatherette-covered volume with gold lettering and two red bands of tape across the cover. The spine has a faded strip along its length. This is a printed document, without signatures and bound with copies of the proceedings and memoranda of the 1926 Imperial Conference. 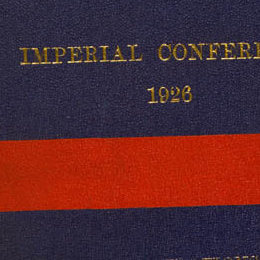 Detail showing the gold lettering on the cover of the Balfour Declaration.