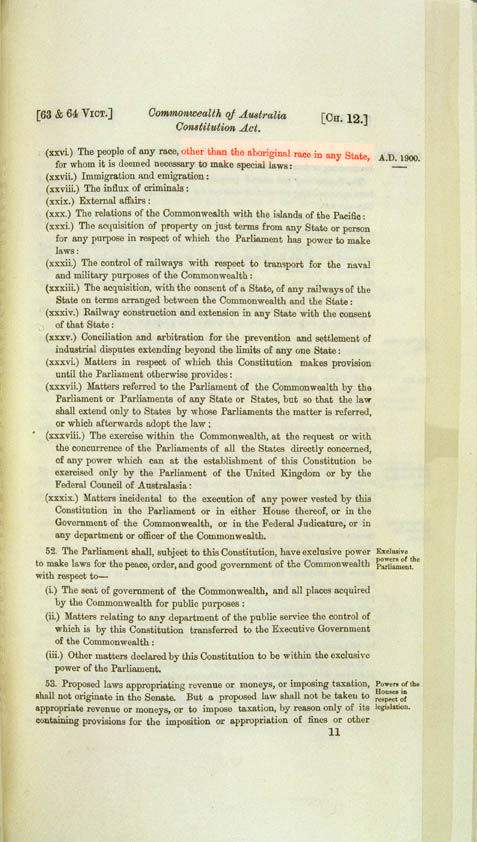 
51. The Parliament shall, subject to this Constitution, have power to make laws for the peace, order, and good government of the Commonwealth with respect to:–

Trade and commerce with other countries, and among the States:
Taxation; but so as not to discriminate between States or parts of States:
Bounties on the production or export of goods, but so that such bounties shall be uniform throughout the Commonwealth:
Borrowing money on the public credit of the Commonwealth:
Postal, telegraphic, telephonic, and other like services:
The naval and military defence of the Commonwealth and of the several States, and the control of the forces to execute and maintain the laws of the Commonwealth:
Lighthouses, lightships, beacons and buoys:
Astronomical and meteorological observations:
Quarantine:
Fisheries in Australian waters beyond territorial limits:
Census and statistics:
Currency, coinage, and legal tender:
Banking, other than State banking; also State banking extending beyond the limits of the State concerned, the incorporation of banks, and the issue of paper money:
Insurance, other than State insurance; also State insurance extending beyond the limits of the State concerned:
Weights and measures:
Bills of exchange and promissory notes:
Bankruptcy and insolvency:
Copyrights, patents of inventions and designs, and trade marks:
Naturalization and aliens:
Foreign corporations, and trading or financial corporations formed within the limits of the Commonwealth:
Marriage:
Divorce and matrimonial causes; and in relation thereto, parental rights, and the custody and guardianship of infants:
Invalid and old-age pensions:
(xxiiiA) The provision of maternity allowances, widows' pensions, child endowment, unemployment, pharmaceutical, sickness and hospital benefits, medical and dental services (but not so as to authorize any form of civil conscription), benefits to students and family allowances:

Source: Constitution Alteration (Aboriginals) Act 1967 (No. 55 of 1967). (NAA: A1559/1, 1967/55)
Effect
The phrase removed from Section 51.xxvi and the repeal of Section 127 eliminated the provisions of the Australian Constitution which discriminated against Aboriginal people. This change was the result of a long campaign by Aboriginal leaders and their supporters, culminating in the 1967 referendum which won strong support in every State. Aboriginal people had won the right to vote in 1962, but those living in the Northern Territory were unable to vote in the referendum � a right denied people in the Northern Territory and Australian Capital Territory until the 1977 Constitutional amendment to Section 128.