At the time, treaties were regarded as either 'political' (mainly concerning relations between governments) or 'commercial' (mostly concerning the treatment of private persons or interests, particularly as regards business). Prior to 1919 the Australian Government was frequently not even consulted regarding political treaties, which were signed by Britain for its Dominions.

With the other three British Dominions, Australia was among the 32 signatories of the Treaty, and a founding member of the League of Nations it established. This newly defined status is indicated in the list of nations on page 18 of the Treaty, where the names of Australia, Canada, New Zealand and South Africa are indented under the 'British Empire'. The Treaty recognised a new status for these nations among all the colonies of Great Britain, as only fully self-governing nations could be members of the League of Nations.

History
The vision of a world organisation of nations had inspired those who sought ways of implementing the ideals of peace and cooperation in diplomacy for centuries. In the mid 19th century the world alliances and international meetings for the abolition of slavery and for the promotion of peace, laid the foundations for a permanent body to deal with such international issues. The establishment of the League of Nations in 1919, at the end of 'the war to end all wars', was the first official international organisation of governments formed for this purpose. Delegates from member nations met annually at the League's headquarters in Geneva, where a skilled secretariat of 'international civil servants' developed the wide-ranging work of the League.

The ceremonial signing of the Treaty took place in the Hall of Mirrors at the Palace of Versailles on the outskirts of Paris, at three o'clock on the summer afternoon of 28 June 1919. More than a thousand people were crowded into the vast room, with a long velvet-covered table at one end where the 72 delegates were seated. Although Germany had to be the first to sign the Treaty, the signatures of Herman Muller and Johannes Bell, the two German delegates, appear last on the pages (signatures page 11). As soon as Muller and Bell signed, the great fountains of Versailles, stilled when war was declared in 1914, were turned on, the spectacle visible through the wall of windows, and to many of the 50 000 people assembled in the Palace grounds.

The delegates for the other 31 nations then lined up to sign the Treaty which lay on a small table raised on a dais. First in line were the five US delegates led by President Woodrow Wilson (signatures pages 1–2). Wilson was called the 'father of the League' – his devotion to the cause of an organisation of nations dedicated to securing peaceful resolution of conflict was one of the most important factors in its establishment. Ironically, he was to be unsuccessful in persuading Congress that the United States participate. Then came the five British delegates, including Prime Minister David Lloyd George and Foreign Secretary Arthur Balfour (signatures page 2). The Dominions were next, New Zealand, Australia, and South Africa, followed by Canada. Next in the long line were the delegates for France, Italy, and Japan, followed by those of the remaining 22 nations, with Czechoslovakia last in the long line.

The primary significance of the Treaty of Versailles was to establish the conditions of peace ending World War I, but Australia's role as a signatory and full member of the League of Nations marked the first step to recognition of the full national status of the Commonwealth of Australia. Article 10 binds each member 'to respect and preserve' the 'territorial integrity and existing political independence' of all other member nations.

While some members saw granting the Dominions full membership as giving Britain four extra votes, others agreed with US negotiator Colonel Edward House that 'If Great Britain can stand giving her Dominions representation in the League, no one should object'. It was clear in the negotiations over drafts of the Treaty, in the six months the delegations met in Paris during 1919, that Britain and the Dominions had different views on important issues. Australia and New Zealand took a strong stand on the issue of assigning former German possessions in the Pacific to Japan for instance, with Prime Minister William Morris (Billy) Hughes issuing an ultimatum that Australia would not be part of Britain's agreement to this.

Membership of the first official international organisation guiding the relations of nations was a definitive step in the recognition of sovereign status, reinforced with granting Australia mandates over Papua New Guinea and Nauru, authorising Australia as an 'advanced nation' to administer the territories on behalf of the League.

Australia's Treaty of Peace (Germany) Act, assented to on 28 October 1919, provided for domestic implementation of the Treaty.

For 20 years the League engaged not only in attempts to achieve disarmament and peaceful resolution of international disputes, but also in work to promote advancement in health, scientific, cultural, economic and humanitarian fields. While the outbreak of war in 1939 marked the failure of the primary aim of the League, its achievements in many other fields were outstanding, and provided the foundation for the work of the United Nations in these fields after it was established in San Francisco in 1945.

Bendiner, Elmer, A Time for Angels – The Tragicomic History of the League of Nations, Alfred Knopf, New York, 1975.

Starke, JG, 'The Commonwealth in international affairs' in Rae Else-Mitchell, Essays on the Australian Constitution, The Law Book Company, Sydney, 1952.


Description
This document is Australia's authenticated copy of the Treaty of Versailles, bound into a volume with photographed facsimile pages of the signatures and official seals. The volume has a dark grey cover and is kept in a black leatherette satchel. The Covenant of the League of Nations forms Part I of the Treaty at Articles 1–26. The signatures and seals of Australia's delegates, Prime Minister Billy Hughes and Deputy Prime Minister Joseph Cook, are on the third page of signatures, following those of the US, British and Canadian delegates. 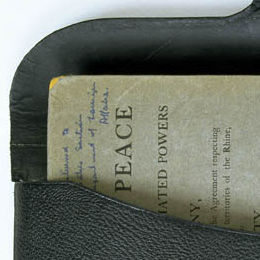 Detail of the black leather satchel containing Australia's copy of the Treaty of Versailles.