The detailed provisions of this Act provided for the establishment of a Supreme Court of Van Diemen's Land which would hear all pleas, civil, criminal or mixed. It would have the same powers as the common law courts of King's Bench, Common Pleas and Exchequer in England, and also the Equity Court of Chancery there. The new Supreme Court also was given ecclesiastical jurisdiction, so it could decide such matters as probate and letters of administration.

Civil cases were normally to be heard before the Chief Justice and two magistrates, but if all parties agreed, the magistrates could be replaced by a jury of 12 men. Appeals from civil cases decided in the Supreme Court could go to a Court of Appeal comprising the Governor and Chief Justice. An appeal to the Privy Council was possible when more than £500 was involved. In criminal cases, a jury of seven military or naval officers would be assembled. Most of these procedures resembled those of the Courts of Criminal and Civil Judicature abolished by this Act.

Section 44 of this Act authorised the separation of Van Diemen's Land from New South Wales which took place under the 1825 Order-in-Council.
History
This Act was a result of the recommendations of Commissioner John Thomas Bigge, sent from London in 1819 to investigate the state of the Colonies of New South Wales and Van Diemen's Land. His report was critical of the administration of both places, and prompted reorganisation, including the administration of justice.

In 1823 New South Wales was still a penal colony, considered by the British Government not yet ready for a representative government. However, the Legislative Council provided for in this Act can now be seen as a first step towards a 'responsible' Parliament.

Although its members were all appointed by Britain's Secretary of State, they had the power to advise the New South Wales Governor in the exercise of his legislative powers. Councillors' opposition could, in normal circumstances, defeat a law proposed by the Governor. In addition, the Council had control over local appropriation of revenue.

Decisions of Governor and Council remained subject to veto by the Crown. Proposed laws had first to be certified by the Chief Justice of the Supreme Court as compatible with English law, and each proposed law was required to be set before the British Parliament.

There was a 'sunset clause' to this provisional Act, which was to terminate in five years (Section 45). The succeeding legislation was the Australian Courts Act 1828. 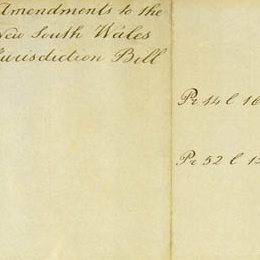 Detail of the amendments to the New South Wales Act 1823 (UK).