View scans
title | p1 | p2 | p3 | p4 | p5 | p6 | p28 | p32 | p33 | p34 | p48
Australian Courts Act 1828 (UK)
Significance
This document enacted legislation of the British Parliament which ensured that the laws of England would be applied in the two existing Australian colonies, New South Wales and Van Diemen's Land. The Act strengthened the role of both Supreme Courts as appeals from Supreme Court decisions to the Governor were ended (although appeals to the Privy Council could still only come from the Governor). It provided for trial by jury in the Supreme Court in civil cases and empowered the Governor to introduce general trial by jury in criminal matters. (Trial by jury for people charged under criminal law was established in 1833 in New South Wales and, in limited circumstances, in 1834 in Van Diemen's Land.)

The Act put beyond legal doubt that the laws of England current on the precise date the Act came into operation would be applied in Van Diemen's Land, as in New South Wales. Section 24 of the Act set the date of this invisible transfer as 25 July 1828, 'Reception Day'. The Act strengthened the legal and civil standing of the legislative and judicial institutions of New South Wales and Van Diemen's Land, in the eyes of the colonists and, perhaps, also in the view of Britain.

The main provisions of the Act were:

History
The 1828 Act included a provision stating that English law in force in that year was operative in the two Australian colonies. This meant that English law as it stood in 1828, rather than earlier laws, applied in both New South Wales and Van Diemen's Land. Later English Acts of Parliament did not apply unless they were specifically passed for the colonies. Australian statute law thus had a firm foundation, but was able to evolve according to its own conditions and needs.

An amendment of the Jury Act 1829 (NSW) in 1830 permitted ex-convicts to serve on juries there.

Section 24 of this Act (the 'reception' Section) was to put beyond doubt that Van Diemen's Land was a civil colony, even if continuing penal functions and a strong quasi-military ambience made it an unusual one. With the 1828 Act, Van Diemen's Land enters the ranks of British colonies of settlement generally. Subject to the hurdle of the 'applicable in 1828' requirement, the broad body of English law was accessible to British subjects in the Colony.

Even Lieutenant-Governor George Arthur sometimes seemed to see the Colony on the path to a civic society. While Van Diemen's Land was, for the present, 'an extensive Gaol to the Empire', in 1826 he wrote to Earl Bathurst, Secretary of State for the Colonies, that he was 'laying the foundations of a free Colony'. Eventually:

As, when the rugged scaffolding and rubbish is removed, a magnificent and well-proportioned Building delights the Eye, so here, when transportation shall cease, and all its chains and trammels disappear, a flourishing country will be at once exhibited.

The Act envisaged the issuing of a new Charter of Justice for Van Diemen's Land and, as Alex Castles noted, this second Charter, which arrived in 1831, 'with other local legislation set firmly the foundation for the working of the Supreme Court for the 19th century and beyond'.

An issue of abiding significance for Tasmania and the eastern Australian colonies was how far the legislative power of the Colonies was delimited by British statutes either preceding or following Reception Day. This issue was largely settled when the British Parliament passed the Colonial Laws Validity Act 1865 (28 & 29 Victoria c 63). Sections 2 and 3 of this Act laid down, in effect, that the only colonial legislation which could be voided on the ground of repugnancy, was legislation inconsistent with British statutes directed to that specific Colony.

A later step towards Tasmanian legislative independence from Britain was the 1907 British legislation, the Australian States Constitution Act. This virtually limited Bills which could be reserved for Royal Assent to those which altered the Constitution of the Tasmanian Parliament. Tasmanian legislative independence was achieved with the Australia Act 1986, concurrently enacted by the Commonwealth, State and United Kingdom Parliaments. 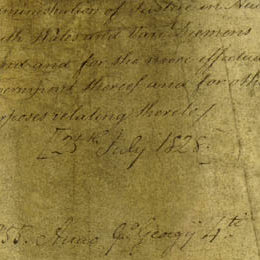 This detail shows the brown handwritten title of the document.