View scans
title | p1 | p2 | p3 | p4 | p5 | p6
New South Wales Courts Act 1787 (UK)
Significance
This document is the assent original of the foundation Act of the legal system of the Australian colonies, establishing the first criminal court. It ensured that British law landed with the First Fleet in 1788 and that the convict colony had the basis for law enforcement. The Act also allowed for a more 'summary' legal proceeding than was usual, adapting court procedures to the conditions of the new convict colony. The Court was established by the Letters Patent of 2 April 1787.
History
New South Wales had been chosen by the British Government as a penal colony, to which convicts (many of whom had had their death sentence commuted to transportation) were destined. The convicts would greatly outnumber the free, and discipline was uppermost in planning for the Colony. This concern was reflected in the Instructions given to Captain Arthur Phillip in 1787. 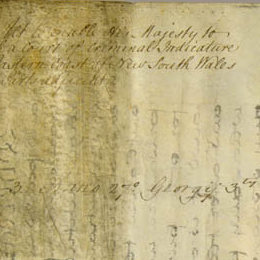 Detail from the cover of the New South Wales Courts Act 1787 (UK).