Return to list of
Commonwealth documents
Coastal Waters (State Powers) Act 1980 (Cth)
Significance
This document transferred constitutional power over coastal waters, and title to seabed minerals within territorial limits, from the Commonwealth to the States and was passed with the consent of each State Parliament under Section 51.xxxviii of the Australian Constitution.
History
In 1973 the Labor Government of Gough Whitlam passed the Seas and Submerged Lands Act, giving the Commonwealth sovereignty of Australian territorial seas and resources to the extent of the continental shelf. State governments opposed this extension of Commonwealth sovereignty and requested the law be changed to return their control of valuable seabed resources such as oil. In 1980 Malcolm Fraser's Coalition Government legislated to transfer to each State constitutional power over the territorial seas and also title to seabed minerals and other resources.

Although the Commonwealth boundaries extended by the Seas and Submerged Lands Act in 1973 were retracted by the Coastal Waters (State Powers) Act in 1980, the Commonwealth still exercises responsibility over coastal waters in matters related to its constitutional powers, including defence and foreign affairs. In international matters the Commonwealth government exercises national sovereignty, such as in signing the Timor Gap Treaty with Indonesia in 1991. This Treaty established a zone of cooperation in the Timor Sea, between East Timor and northern Australia. Under the Treaty these 'submarine' neighbours agreed to sovereignty over a common undersea area where the continental shelf extending from Java meets the northern Australian continental shelf.

Since the amendment of the Australian Constitution (S.51, S.127) in 1967, the Commonwealth has responsibility to legislate for Aboriginal and Torres Strait Islander people. This power means the Commonwealth government is also involved in matters relating to Indigenous ownership and use of coastal waters, the seabed and resources. This responsibility is most directly exercised under the Native Title Act, passed in 1993 to give legislative effect to the High Court's recognition of Indigenous Australians' prior occupation of the continent and islands in the Mabo Case in 1992.
Description
This document is in the now standard booklet format. The signatures of the Governor-General, Sir Zelman Cowen, and the Clerk of the House of Representatives, and the date of Assent, 29 May 1980, are on page 4. 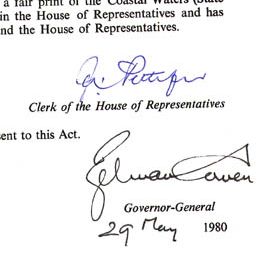 Detail showing signatures of Zelman Cowen and the Clerk of the House of Representatives.