View scans
cover | p1 | p2 | p3 | p4 | p5 | p6
Seat of Government Acceptance Act 1909 (Cth)
Significance
This document, signed on 13 December 1909, completed the transfer of land agreed by New South Wales to establish the Federal Capital Territory as the seat of Commonwealth government.
History
The site for the capital city of the proposed Federation was discussed at the final Federal Convention in Melbourne in 1898, but a decision was left to the new Parliament. A meeting of the Premiers of New South Wales, Victoria, South Australia, and Tasmania in Melbourne at the end of January 1899, added the proviso that the site should be in New South Wales, but at least 100 miles from Sydney. The Premiers also decided that, like Washington, the new capital would have a territory with a minimum area of 100 square miles.

This provision was included in the Australian Constitution and as soon as the Act became law, proposals for siting the capital rapidly accelerated. The new Parliament would occupy Parliament House, Melbourne, until its permanent home was ready, so New South Wales was particularly keen to set the process in train. Many localities were proposed, including some within the 100-mile boundary from Sydney, like Bathurst. The New South Wales government appointed a Royal Commissioner to report on 45 proposed sites.

Over the next six years the problems of choosing a site mounted. William Lyne was appointed Minister for Home Affairs on 1 January 1901. As he was the first responsible Minister, he arranged train tours by parliamentarians in 1902 to review possible locations and he set up a Capital Sites Enquiry Board in December that year. The members of the Board were appointed Commissioners the following year, and they reported on nine nominated sites in July 1903. Their report favoured Albury or Tumut, whereas the 1900 New South Wales report had recommended Bombala.

In 1903 Lyne introduced a Seat of Government Bill which prompted a House of Representatives ballot in October 1903 to decide on a site, with Tumut the winner. When the Bill went to the Senate, that House amended it in favour of Bombala, and the Bill was stalled when Parliament rose prior to the Federal election on 16 December 1903. Parliament continued to debate the issue even after passing a Seat of Government Act in 1904, without achieving a final result.

After the next election, on 12 December 1906, debate continued. By this time the Yass–Canberra locality had won supporters, and was included in another site ballot in the House of Representatives in October 1908. Though Yass–Canberra won this ballot, the Senate then also held one, with Bombala and Yass–Canberra tied for first place. Legislation approving the Yass–Canberra site was enacted in December 1908.

A site for the city was chosen within this district and an area of 912 square miles designated for the Federal Capital Territory at Yass–Canberra. With an additional area at Jervis Bay, this land was released by the New South Wales government with the Federal Capital Territory Surrender Act. These Acts thus altered the boundary of New South Wales and granted the Commonwealth two 'footprints' for the establishment of the national capital with a site for the new Royal Australian Navy. In 1914 a further area at Jervis Bay was added; despite speculation about development of 'Pacific City' as a seaport for Canberra, it remained the naval base HMAS Creswell rather than becoming a commercial port.

The Federal Capital Territory, now the Australian Capital Territory (ACT), was thus specifically created as the site for Commonwealth government. Three years after the seat of government was established at Canberra and after the opening of the first Parliament House in 1927, an ACT Advisory Council was established to administer the capital. In 1974 this became an elected Legislative Assembly, advising the Department of the Capital Territory. In 1979 this became a House of Assembly, which was dissolved in 1986 prior to the Australian Capital Territory (Self-Government) Act 1988, which established a Legislative Assembly with full powers to make laws for the ACT. This met for the first time in May 1989.

As a federation, the actual boundaries of the Commonwealth of Australia depend on its specific constitutional powers – it is a constitutional rather than a geographic entity. However, the Commonwealth of Australia has included land other than the ACT, as territory has been assigned to it by the States, by Britain, and by international agreement. These territories have been under various forms of jurisdictional, legislative, or administrative control.

Norfolk Island, transferred from New South Wales to the Commonwealth in 1914, became self-governing with the establishment of an elected Parliament in 1979.

Territories still administered by the Commonwealth are the Cocos (Keeling) Islands and Christmas Island, both in the Indian Ocean, which became Commonwealth territories in 1955 and 1958; and the Coral Sea Islands Territory off the coast of north Queensland, under Commonwealth control since 1969. The Commonwealth also has authority over the Australian Antarctic Territory, established in 1936.


Description
This document is in the form of a booklet of untrimmed pages secured with three royal blue silk ribbons, with the Royal Arms on the front cover and the first page. 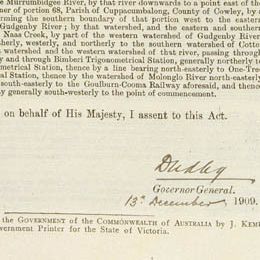 This detail shows the signature of the Governor-General on the assent to the Act.