View scans
cover | p1 | p2 | p3 | p4 | p5 | p6 | p7 | p8 | p9
Northern Territory Acceptance Act 1910 (Cth)
Significance
The Governor-General assented to this law on 16 November 1910, providing for the transfer of the Northern Territory to the Commonwealth as the third Commonwealth territory, after Papua, and the Federal Capital Territory.
History
Territorians were strong supporters of Federation in the 1898 referendum but both the South Australian and Commonwealth parliaments were less decided on the issue of the transfer of the Territory to the new Commonwealth. Although the initial proposal by Premier Frederick William Holder was made in April 1901, it was not until December 1907 that the two governments executed a formal agreement for the transfer.

Though South Australian Premier Tom Price secured enactment of the necessary Surrender Act in March 1908, the Commonwealth Act was slow in coming. Deakin and his advisors disagreed with some provisions of the South Australian Act. No sooner was that problem solved than the Deakin government fell to the Labor Opposition under Andrew Fisher. The Fisher Ministry, preoccupied with Labor's social aims, put aside the question of Territory transfer.

In May 1909 Deakin, at the head of the newly-created Fusion Party, returned to power. Five months later the Fusion ministry brought the Northern Territory Acceptance Bill into the House of Representatives. Most Members conceded that, for reasons of defence and development, the Commonwealth should acquire the Territory; but beneath the debate lay a deep sense of uneasiness born of the South Australian experience. Deakin alone expressed a bright pan-Australian vision. The Bill did not pass in 1909, for the Senate delayed it until it lapsed.

When Andrew Fisher's Labor Ministry reintroduced the measure in 1910, Deakin threw the whole force of his influence behind it. The Bill passed and from 1 January 1911 the Northern Territory became the exclusive responsibility of the Commonwealth of Australia. South Australian laws remained in force, subject to any later changes by the Commonwealth. 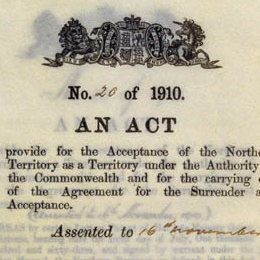 Detail from the cover of the Northern Territory Acceptance Act 1910 (Cth).