Return to list of
Commonwealth documents
Commonwealth Electoral Act 1924 (Cth)
Significance
This document, signed by the Governor-General on 10 October 1924, alters the original Commonwealth Electoral Act by making voting compulsory and establishing penalties for failure to vote. This is a founding document, with the Commonwealth Franchise Act 1902, defining the terms on which Australians vote.
History
This document made Australia one of the few nations in which voting is both a right and a duty. The Act, proposed by the Chief Electoral Officer after the fourth Federal election in 1910, originated as a private member's Bill. It was supported by the Bruce–Page Coalition Government and also by the Opposition, and passed speedily through Parliament.

This was an amendment to the original Commonwealth Electoral Act of 1902 which set up the machinery for federal elections by:

Description
This document has one folded sheet, forming four pages (fourth page blank), fixed inside a paper cover with blue ribbon, with the Royal Arms. The signatures are on p.1 and p.3. 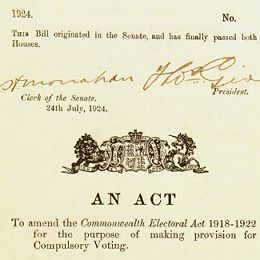 The Clerk of the Senate and the President signed this Bill.