View scans
cover | p1 | p2
Commonwealth Franchise Act 1902 (Cth)
Significance
This document, which became law when signed by the Governor-General on 12 June 1902, set out who could vote in elections for the House of Representatives and the Senate, the two Houses of the new Commonwealth Parliament.

The Act excludes from enrolling to vote all 'aboriginal native[s] of Australia Africa Asia or the Islands of the Pacific except New Zealand' unless covered under Section 41.

Women in the four States without female suffrage achieved the right to vote in Commonwealth elections under Section 3 of this Act.
History
Women in all the Australian colonies had campaigned for the right to vote for years, and many saw Federation as their golden opportunity to become voters for the new national parliament. Because women (other than those excluded on racial grounds) could vote in South Australia (and thus the Northern Territory) and Western Australia, they were eligible under the Australian Constitution. Those in New South Wales, Tasmania, Queensland, and Victoria achieved the right to vote in the Federal election on 16 December 1903 under this Act. These women finally won the right to vote in their State elections in (August) 1902, 1903, 1905, and 1908 respectively.

Despite continuing commitment to the 'White Australia' policy, in 1925 an amendment to this Act extended the right to vote in Commonwealth elections to all naturalised Australians regardless of their race. Granting the vote to people from India, which was part of the British Empire, was particularly contentious.

In 1949 another amendment permitted Aboriginal people who had served in the war to vote. In 1962 the right to vote was finally extended to all Aboriginal adults and voting was made compulsory for Aboriginal electors in 1983.


Description
This document has two untrimmed paper pages, printed on both sides, inside a parchment cover, held together with blue silk ribbon ties. The Royal Arms is on the cover and the first page. The Commonwealth Coat of Arms was not approved until 1908 and was not used on Acts of Parliament until many years later. 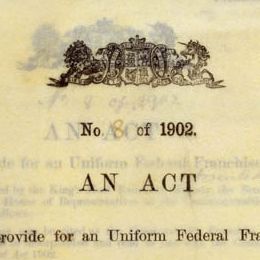 Detail from the cover of the Commonwealth Franchise Act 1902 (Cth).