Although the British intended to transport English law and legal proceedings along with the convicts, in practice there were significant departures from English law in the new and distant Colony. Notably, the first civil case heard in Australia, in July 1788, was brought by a convict couple. They successfully sued the captain of the ship in which they had been transported, for the loss of a parcel during the voyage. In Britain, as convicts, they would have had no rights to bring this case.
Description
There is a sketch of King George III on the first page and the document also has a decorative border with a navy blue seal running part way down the left border on each page. The three pages are bound together at the bottom with a plaited cord. 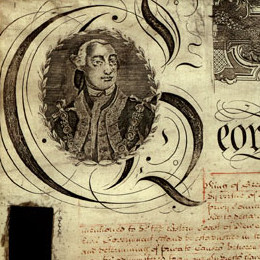 This detail shows some of the decorative border on the Charter of Justice.