The Lieutenant-Governor's Court of Van Diemen's land was empowered to hear pleas only when the sum in dispute did not exceed £50. Until the creation of this Court, only magistrates courts actually sat in Van Diemen's Land. These were confined to ordering corporal punishment or transportation for non-capital offences below £50.
History
Before the creation of the Lieutenant-Governor's Court, and to a large extent up to 1823, provision in Van Diemen's land for the administration of justice was meagre.

From the time of Collins and Bowen, Van Diemen's Land was a civil colony, its status derived from the 1787 New South Wales Courts Act and first Charter of Justice. The Act's preamble stated that the convicts were to be transported to 'a colony and a civil government'. Thus from the very start in New South Wales the law dispensed in criminal and civil courts was not military law, but the law of England, so far as it was applicable to the particular circumstances of a penal colony. As a dependent Colony of New South Wales, Van Diemen's Land was within the jurisdiction of the criminal and civil courts of New South Wales.

The Island's civil status was evident in its division into two 'counties' and in the appointment there of a Deputy Judge Advocate. On 15 January 1804 (when colonial officials in London still believed Collins was founding a colony at Port Phillip), Royal Letters Patent were issued appointing Samuel Bate as Deputy Judge Advocate, but when Bate eventually arrived at the Derwent settlement in 1806, he did not bring the necessary Charter of Justice to create the civil and criminal courts over which he could lawfully preside.

David Collins, who had himself brought the 1787 Charter of Justice to Sydney in 1788 when he took up the post of Deputy Judge Advocate was bitterly disappointed when Bate arrived in Van Diemen's Land without a Charter. Collins wrote to the Colonial Office in London:

The arrival of this Officer had long been anxiously expected by me, as I had hoped the administration of Public Justice and the infliction of Capital punishment would follow his appearance, and that the Commission of Crimes, which the peculiar Circumstances of the Settlement have rendered frequent, would thereby have received an effectual check; but to my extreme regret, I learned from himself that he was wholly unprovided with the Authority from Parliament necessary to constitute a Court of Criminal and Civil Judicature.

Bate continued to receive his salary as Deputy Judge Advocate, though neither lawfully empowered nor lawfully appointed, until 1814, when this Charter of Justice was issued. The Island's European population was then still under 2000, with less than a quarter of these in penal servitude. The Colony's value to the British government remained as a means of pre-empting French settlement.

People pursuing civil cases in Van Diemen's Land had to pay for their own travel, and that of their witnesses, to Sydney, as the Deputy Judge Advocate there was not willing to travel to the Island. The New South Wales Surveyor-General, John Oxley lamented in 1810 over similar problems in criminal cases:

The Lieutenant-Governor is obliged to send every Prisoner to Sydney for trial, where, from want of Evidence, the length of time which must have elapsed since the Commission of the Crime, and the reluctance of Prosecutors to go to such a distance, are frequently the Causes of many notorious Offenders escaping unpunished; this Want of Power to punish Criminals capitally [that is, impose the death penalty] has the worst Effect on the ill-disposed, as the almost certain Chance of their escaping unpunished encourages them to commit any kind of depredation (Historical Records of Australia, Series III, vol. I, p. 579).

The creation of a New South Wales Supreme Court in 1814, which could hear civil pleas above £50, did not alter the need for civil litigants and witnesses to travel to Sydney. It was 1819 before the Chief Justice of the Supreme Court made his first visit to Van Diemen's Land. The Island was no better served by the criminal court, which was not covered by this Charter of Justice, and prosecutors, defendants and witnesses still had to go to Sydney. The first visit of the Judge-Advocate to Van Diemen's Land was not until 1821.

When John Bigge reported on the colonial judicial arrangements in 1823 he affirmed in strong terms the poor quality of service provided by these two courts to Van Diemen's Land. The three courts established by this Charter were superseded by arrangements set up under the new Charter of Justice in 1823.


Description
The eight pages are stored in a navy leather-bound folder. The first page of the document bears a sketch of King George III in the top left-hand corner. 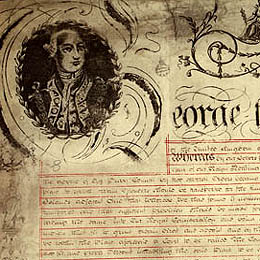 Detail showing the decorative border on the first page of the Charter of Justice 2 April 1814 (UK).