View scans
cover | p1 | p2 | p3
Statute of Westminster Adoption Act 1942 (Cth)
Significance
With this document Australia adopted an Act of the British Parliament which set out as law the independence of the governments of Australia, Canada, New Zealand, Eire and Newfoundland. These had become self-governing Dominions of Britain, rather than colonies, but what this meant constitutionally had never been made clear. 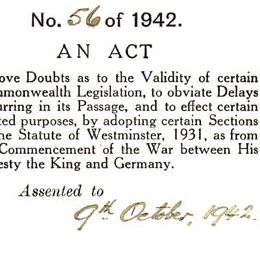