View scans
p1bark | p2bark
Yirrkala bark petitions 1963 (Cth)
Significance
These are the first documents bridging Commonwealth law as it then stood, and the Indigenous laws of the land. These petitions from the Yolngu people of Yirrkala were the first traditional documents recognised by the Commonwealth Parliament and are thus the documentary recognition of Indigenous people in Australian law.

Petitions to Parliament must conform to certain rules of procedure and the acceptance of these petitions marks a bridge between two traditions of law. There had been many earlier petitions from Aboriginal people to Australian parliaments, and attempts to present petitions to the Crown. These petitions are the first to use traditional forms and combine bark painting with text typed on paper.

The painted designs proclaim Yolngu law, depicting the traditional relations to land and the typed text is in English and Gumatj languages.

The petitioners unsuccessfully sought the Commonwealth Parliament's recognition of rights to their traditional lands on the Gove Peninsula in Arnhem Land through this instrument proclaiming those rights in traditional form. Though these documents did not achieve the constitutional change sought, they were effective in making a way for the eventual recognition of Indigenous rights in Commonwealth law.

The Yirrkala petitions are significant as a key part of the persistent claim for constitutional change which achieved the amendment of the Australian Constitution (S.51, S.127) in 1967, the statutory acknowledgment of Aboriginal land rights by the Commonwealth in 1976, and the overturning of the obstacle of the concept of terra nullius by the High Court in the Mabo Case in 1992.
History
Yolngu people from Yirrkala in eastern Arnhem Land in the Northern Territory sent the petitions to the Commonwealth Parliament in August 1963. On 13 March that year the Government had removed more than 300 square kilometres of land from the Arnhem Land reserve so bauxite found there could be mined. Work started without talking to the people about their land. Two Labor parliamentarians, Kim Beazley (senior) and Gordon Bryant visited Reverend Edgar Wells, Superintendent of the Yirrkala Methodist church mission, in July 1963. Yolngu leaders made plain their objection to the lack of consultation and secrecy of the Government's agreement with Nabalco, and their concern about the impact of mining on the land unless their voices were heard.

The first two petitions, requesting an inquiry, were presented in the House of Representatives on 14 August by Jock Nelson, Member for the Northern Territory, and on 28 August by Arthur Calwell, Leader of the Opposition. A parliamentary committee of inquiry listened to evidence presented at Yirrkala and in Darwin. The committee's report acknowledged the rights the Yolngu set out in the petitions and recommended to Parliament on 29 October 1963 that compensation for loss of livelihood be paid, that sacred sites be protected and that an ongoing parliamentary committee monitor the mining project.

When their appeals to Parliament failed to achieve the justice they sought, the Yolngu leaders turned to the Supreme Court in the Northern Territory, where hearings in their case, known as the Gove Land Rights Case, began in 1968.

This case also failed. Handing down his decision in 1971, the judge accepted the evidence that Yolgnu had been living at Yirrkala for tens of thousands of years and that their law was based on intricate relations to land. He held, however, that Australian law could not recognise these as property relations and that this law as it stood could not solve the problem at the heart of the case: that the facts of Australian history disproved the 'legal fiction' of terra nullius, on which Australian law was built.

One result of this was wider awareness of the just claim of the Yolngu, and of the problems of Indigenous people throughout Australia. The inability of the law to find a just answer to the Yolgnu, who had been turned away first by the Parliament and then by the courts, inspired a national protest.

Schwarz, Janien, Beyond familiar territory: de-centering the Centre: an analysis of visual strategies in the art of Robert Smithson, Alfredo Jaar and the Bark petitions of Yirrkala, PhD thesis, Canberra School of Art, The Australian National University, Canberra, 1999.

Williams, Nancy, The Yolngu and Their Land: A System of Land Tenure and The Fight For Its Recognition, Australian Institute of Aboriginal Studies, Canberra, 1986.

Neither petition is now intact: the typed paper was removed and replaced with copies in an attempt to limit fading of the signatures.

The images shown here are a reconstruction produced for this website by photographing the original papers and digitally replacing them in their original positions. 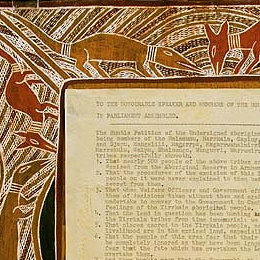 Detail of the bark painting that surrounds the Yirrkala petitions of 1963.