Return to list of
Western Australia documents
Western Australia Act 1829 (UK)
Significance
This legislation was the formal act providing temporarily for the government of the Colony of Western Australia.
History
The Act was introduced into the British Parliament shortly after the first fleet had set out for the new Colony on 9 February 1829. It received the Royal Assent on 14 May 1829. The preamble to the Act stated that these were temporary arrangements until the number of settlers increased and the 'undertaking shall be further matured'.

The Act also made clear that no part of the colonies of New South Wales or Van Diemen's Land would be included within the new Colony.

Battye, JS, Western Australia: A History from its Discovery to the Inauguration of the Commonwealth, Clarendon Press, Oxford, 1924.


Description
Handwritten on membranes of vellum about 18–19 inches long and 12 inches wide, sewn end to end and then rolled up. 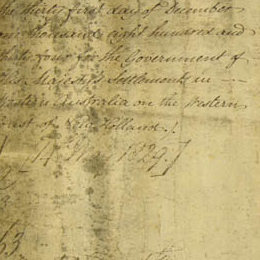 Detail from the last page of the Western Australia Act 1829 (UK).