Under this Act, not even the Crown had power to grant leases of Deed of Grant in Trust (DOGIT) land to unqualified persons, thus reversing a long-standing colonial process of segregation, surveillance and exploitation.

History
During the 1960s and 1970s, the Queensland Department of Aboriginal and Islander Affairs (DAIA) had remained the most intransigent against reform of any of the government agencies dealing with ‘native affairs’ issues in Australia. By the early 1980s, the mounting tide of protest against paternalistic racial legislation, emanating from Aboriginal activist groups and white supporters, had forced a reassessment of the situation whereby Aboriginal reserves and missions remained under authoritarian white control.

The Aborigines and Torres Strait Islanders (Land Holding) Act became law in June 1985 and the first deeds were issued in October. Initially these were granted to all 15 of the Torres Strait Islands where people lived, save for Murray Island, the subject of the case being fought by Eddie Koiki Mabo and others before the High Court.

Granting DOGITS to Aboriginal settlements (as reserves and missions were now called) on the mainland proved more problematic. There were intense negotiations over the land areas affected for each settlement and there were considerable misgivings over the issue of mineral, petroleum and forestry rights reserved by the Crown. The passage of the 1985 Act was accompanied by warnings from the National Party Government about individual initiative and the attainment of self-sufficiency through the development of private enterprise.

Encouragement of this ethos carried the danger of compromising a culture of communal control and spiritual responsibility to the land. Considerable difficulties over policing the settlements also occurred, with the Queensland Police pleading budgetary restraints to law enforcement servicing (under the guise of self-management) to many of these regions. This made worse the already pressing problems of crime, violence and domestic instability in these impoverished communities. 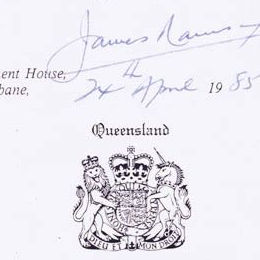 Detail showing the Queensland crest and signature of the Governor assenting to the Aborigines and Torres Strait Islanders (Land Holding) Act 1985 (Qld).