Return to list of
Queensland documents
Aboriginals Protection and Restriction of the Sale of Opium Act 1897 (Qld)
Significance
This document is the instrument effecting a major law directed at Aboriginal people in Queensland. It was followed in other Colonies and thus probably affected more Aboriginal people than any law until the passage of the Commonwealth Native Title Act 1992.

This Act controlled the fates of Indigenous people in Queensland – the State containing the largest number of surviving Aboriginal and Torres Strait Islander peoples – throughout much of the 20th century. It was the model for similarly 'protective' and restrictive legislation in Western Australia in 1905, the Northern Territory in 1910 and South Australia in 1911 – the three other places with the highest Indigenous populations after the first century of British occupation.
History
Eleven of the Act's 32 sections deal stringently with control of the supply of opium to Aboriginal people. The Act thus reflects a contemporary view – Chinese in Queensland were regarded as the principal purveyors of this drug, and therefore were regarded as the source of the problems experienced by Aboriginal people.

Of equal concern in the legislation, however, was the establishment of reserves – geographically isolated enclaves – to which Aboriginal people could be forcibly removed by designated 'Aboriginal Protectors' – civil servants, police and missionaries. People were restricted to these reserves ostensibly to protect them from the ravages of European immorality and disease. In effect, such reserves operated initially to separate unproductive, ill and 'problematic' Aboriginal people from those working efficiently in European industries – pastoral, agricultural, marine and domestic. As time passed, they also became labour reservoirs from which Aboriginal contract workers could be drafted to white rural and urban employers.

Furthermore, the legislation was utilised to control Aboriginal people at the workplace and to remove their basic civil rights, reducing them to the position of State wards. It was intended to limit the reproduction of part-Aboriginal offspring – the so-called 'half-caste menace' – seen at the time as a threat to an ideal 'White Australia'.

The 1897 Act was strengthened by Amendment Acts in 1899, 1901, 1928, 1934, 1939 and 1946. Then, in 1965 and 1971, new Protection Acts were passed which were also closely moulded on the original 1897 legislation. Although presented at the time as a charitable, humane and philanthropic measure, the 1897 Act in its practical outcome was oppressive and restricted the freedom of Aboriginal people more effectively than the sale of opium. 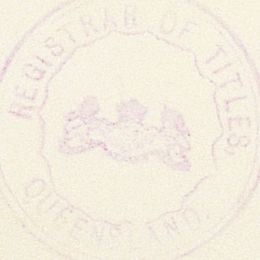 Detail from the last page of the Aboriginals Protection and Restriction of the Sale of Opium Act 1897 (Qld) showing the stamp of the Registrar of Titles.