Return to list of
South Australia documents
South Australia Act 1842 (UK)
Significance
This document is the original of the second South Australia Act. Assented to on 3 July 1842, it repealed the Act of 1834 and gave all powers to the Governor and a Legislative Council of at least seven members nominated by the Crown, subject to the Colonial Secretary.
History
Confused administration, land speculation and economic recession caused the Wakefield experiment to fail and the Province was brought to the edge of bankruptcy in 1840. A British Parliamentary Enquiry recommended the replacement of the Colonisation Commissioners with a more orthodox form of colonial administration. 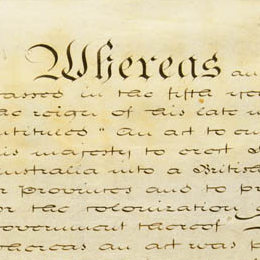 Detail from the first page of the handwritten document introducing the South Australia Act 1842 (UK).