Return to list of
Victoria documents
Australian Constitutions Act 1850 (UK)
Significance
This document is significant for all four Australian colonies established before the 1850s. The Assent original of the British Act of Parliament separating Victoria from New South Wales, and naming and providing a Constitution for the new Colony, it was signed by Queen Victoria on 5 August 1850. 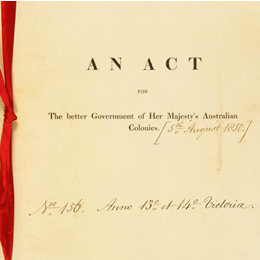