Return to list of
Tasmania documents
Charter of Justice 13 October 1823 (UK)
Significance
This document was the instrument for the creation of the new legal institutions of Van Diemen's Land and provided for the appointment of John Lewes Pedder to preside over them as Chief Justice.
History
These Letters Patent were authorised by the New South Wales Act 1823 to provide 'for the better Administration of Justice in New South Wales and Van Diemen's Land, and for the More Effectual Government thereof'.

On 26 March 1824, after Pedder had arrived in Van Diemen's Land, Lieutenant-Governor Sorell issued a Proclamation declaring him duly appointed Chief Justice, and that on 10 May the Supreme Court would 'enter upon the Exercise of its Jurisdiction according to the full Powers granted by the Royal Charter'. The Charter of Justice was read out by the Provost Marshal at Government House in the presence of the Colony's dignitaries. Immediately after, a salute of 21 guns was fired from Mulgrave Battery. On 10 May the first sitting of the Supreme Court of Van Diemen's Land was held. This makes it Australia's oldest continually functioning superior court, since the opening session of the Supreme Court of New South Wales did not take place until a week later.

The Charter authorised and defined various functions of the Court, such as enrolling barristers and solicitors, and deciding the form of legal procedure in relation to wills and letters of administration, bonds, appeals to the Privy Council, and so on.

The Charter is handwritten, and comprises six parchment sheets of two different sizes. They are joined at the bottom by pink ribbon and the seal cord. Each page is bordered on three sides by decorative bands printed in black ink, probably by etching. The text is inscribed in brown ink on lines ruled by graphite and placed between borders of hand-ruled ornamental lines in red ink. The first page of the document has a dark blue, paper tax stamp affixed on the upper left edge by an ornamental lead staple and glue. It is blind-stamped with a crest and 'seventy-five pounds'. There is general surface dirt and yellowing.

Before conservation treatment the Charter was stored in its original leather-covered wooden banjo box. The leather on the box is decorated with gold tooling, the borders in a grapevine pattern and with various plant and bird symbols. The box has a leather hinge and a lockable brass clip with a hook clasp at each end for additional security. The interior of the banjo box is lined with marbled paper. The parchment leaves were rolled and placed in the long section of the box with the pendant seal housed in a round metal skippet in the circular section of the box.

The seal is 17.7 cm in diameter and is attached to the document by a double-braided red and white cord. On one side is the Great Seal of King George IV and on the other is the seal of Van Diemen's Land. The wax/resin mixture is an opaque, brown-ochre colour. It is fractured into four main pieces with considerable chipping along the fracture edges. 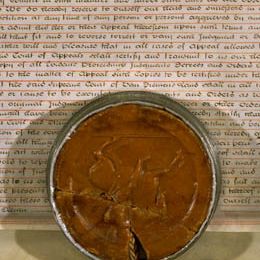