View scans
p1 | p2 | p3 | p4 | p5 | p6 | p7
Aboriginal Lands Trust Act 1966 (SA)
Significance
This law marked the first major recognition of Aboriginal Land rights by an Australian government. The Act returned to the promises contained in the 1836 Letters Patent by establishing a Trust to hold the title and take over the administration of all the existing Aboriginal Reserves for the benefit of the Aboriginal people. The Governor of South Australia assented to the new law on 8 December 1966.
History
A proposed provision for transferring all mining and mineral rights to the Trust was rejected in the Legislative Council and the Bill amended.

Parkin, A and Patience, A (eds), The Dunstan Decade, Longman Cheshire, Melbourne, 1981. 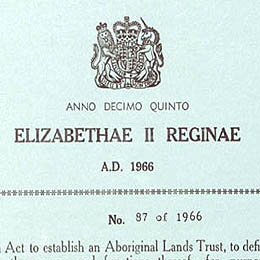 Detail showing the crest on the title page of the Aboriginal Lands Trust Act 1966 (SA).