View scans
p1
Aborigines Act 1910 (Vic)
Significance
With this document Victoria took a step away from the extreme control over Aboriginal people established in the 19th century. This law lessened, but did not remove, the legal distinction between the rights of the white population of the State and those of Indigenous people within Victoria's borders.
History
This Act addressed some of the problems created in Victoria by colonial policies and laws in affecting Aboriginal people. It was initiated in 1909 by John Murray, a grazier from the Western District who had been very critical of the inhumane measures implemented by the Board for the Protection of Aborigines. Murray was State Premier and Chief Secretary and, in his role of Chief Secretary, he chaired the Board for the Protection of Aborigines. He insisted that assistance be given to Aboriginal people outside the reserves and in this Act ensured that the differentiation of Aboriginal people of partial European parentage was abandoned.

This Act is a step in the constitutional shaping of society in Victoria, affecting the relationship between government and people. In this sense the legislation sits midway between the Aboriginal Protection Act 1869 (Vic) and the Aboriginal Lands Act 1970 (Vic).
Description
This document is bound with blue ribbon, with the red seal of the Parliament of Victoria and is in excellent condition. The Act is signed by the Clerk of the Parliaments and the Governor of Victoria. 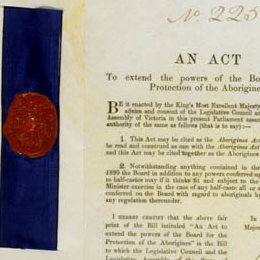 Detail showing the red seal and title page of the Aborigines Act 1910 (Vic).