View scans
p1 | p2 | p3
Aboriginal Protection Act 1869 (Vic)
Significance
This document made Victoria the first Colony to enact a comprehensive scheme to regulate the lives of Aboriginal people. This Act gave powers to the Board for the Protection of Aborigines which subsequently developed into an extraordinary level of control of people's lives including regulation of residence, employment, marriage, social life and other aspects of daily life.
History
Victoria enacted this law to regulate the lives of Aboriginal people at the same time as democratic reforms were being achieved in Britain and the Australian colonies. These reforms included extending the right to vote to all men, not just the wealthy, and measures such as free public education. For Aboriginal people, however, there was no such progress. The powers this Act gave to the Board for the Protection of Aborigines developed into controls over where people could live, where they could work, what kinds of jobs they could do, who they could associate with and who they could marry.

In 1886 in a further Act, Victoria also initiated a policy of removing Aboriginal people of mixed descent from the Aboriginal stations or reserves to merge into white society. The Board refused assistance to those it expelled from the reserves. This effective separation of communities and family members caused distress and protest. People like Bessy and Donald Cameron, who lived on the reserve at Ramahyuck (Lake Tyers), fought to stay together after Victoria's 'half-caste' Act made this unlawful in 1886.

The policy of excluding so-called 'half-castes' assumed that numbers of Aboriginal people on the reserves would decline, so that reserves could be reduced and eventually closed down. The inadequacy and inhumanity of the policy and legislation led to the Aborigines Act 1910 (Vic) and the Aboriginal Lands Act 1970 (Vic).
Description 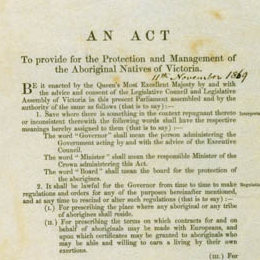