View scans
p1 | p4 | p10 | p11 | p12 | p13 | p14 | p27
Electoral Act 1856 (Vic)
Significance
This document made Victoria the first Australian Colony (and the first legislature anywhere in the world) to adopt the practice of the secret ballot, as opposed to open voting. Only the Assent date of 19 March, when this Act became law, gives Victoria the lead however. South Australia's William Boothby is recognised as the pioneer of the secret ballot, as South Australia enacted a similar law two weeks later, on 2 April 1856.
History
The introduction of secret ballot was one of the measures whereby Victorians democratised their Parliament. The measures that followed were manhood suffrage (1857), abolition of property qualifications for members of the Legislative Assembly (1857), elections every three years (1859), and the Payment of Members Act (1870). 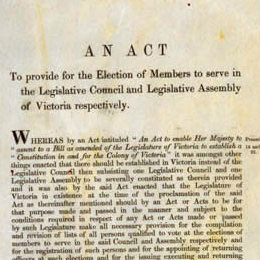