No other State Constitution in Australia contains a provision like this, but a broadly similar provision is included in the Commonwealth Constitution (Section 116). As the Commonwealth Constitution can only be amended by the lengthy process of a national referendum, this is a firmer guarantee than in the Tasmanian Constitution. Section 46 of the Tasmanian Constitution Act 1934 can be repealed or amended like any other statute, by vote in Parliament and Assent by the Governor.
History
There is a puzzle about the inclusion of this Section in the 1934 Constitution Act. This was a consolidating Act rather than one introducing new constitutional provisions; the Acts incorporated are named in the margin. Beside Section 46 is a reference to the 1830 Act extending to Van Diemen's Land an 1829 Act of the British Parliament titled an 'Act for the Relief of His Majesty's Roman Catholic Subjects' (10 George IV No. 5).

The effect of this 1829 Catholic Emancipation Act was to remove many, but not all, of the legal disabilities imposed on Roman Catholics as the Church of England is the established Church. It was not until this change in the law that Roman Catholics were able to sit, and to vote, in the British Parliament and to hold civil and military offices from which they had been debarred under a law passed in 1673.

The Van Diemen's Land Act was assented to by Lieutenant-Governor Arthur on 29 January 1830, two days after a similar New South Wales Act received Assent. Both Acts were intended to remove doubts about whether Roman Catholics were eligible to hold high civil office in these colonies. In Van Diemen's Land the question arose in relation to Edward Curr, Secretary of the Van Diemen's Land Company, who held a seat in the Van Diemen's Land Legislative Council. A Roman Catholic, he had declined to swear, as required under British law, that he did not believe in fundamental tenets of the Catholic faith. He had also declined to comply with the requirement that he deny any allegiance to the descendants of Catholic monarch James II. In the United Kingdom, until the Catholic Emancipation Act was passed, these statements were required before a seat could be taken in Parliament.

Governor Arthur, feeling assured of Curr's 'respectability', waived this requirement, but was unsure enough of his position to write to the Secretary for Colonies, Earl Bathurst, for advice on 21 April 1826. In his reply of 11 December, Bathurst advised that Curr's refusal did not debar him from a taking seat on the Legislative Council.

Bathurst's successor, Sir George Murray was not so confident that colonial Catholics were in the clear, even after the passing of the Catholic Emancipation Act. He sent a copy of the Catholic Emancipation Act to Arthur suggesting that, to remove any doubt that the Act extended to the colonies, Arthur should propose that the Legislative Council declare it applied (CO 289/40815). Arthur complied with Murray's request, as did the Council to the Governor's proposal. The declaratory Act may have enhanced the religious liberty and perhaps the civil status of Catholics in the Colony, but it cannot be called the foundation of Catholic religious liberty. Neither did it provide guarantees to those who were neither Anglican nor Catholic.

So a historical puzzle remains. Why did the 1830 Van Diemen's Land re-enactment of the British Catholic Emancipation Act grow wings in the Tasmanian Parliamentary session of 1934?


Description
This Act of Parliament comprises 45 pages of thick paper with deckled edges. A paper embossed seal stamped on the top right-hand corner of the second page bears the figures from the 'seal of Van Diemen's Land' positioned underneath the Royal Arms. Above this seal is the signature of Governor E Clark. His signature also appears on the final page as his assent to the Act. 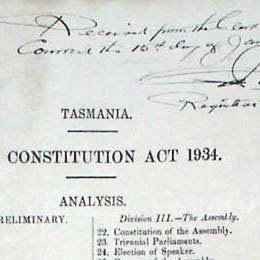 Detail from the contents page of the Constitution Act 1934 (Tas).