View scans
p1 | p2 | p3 | p4 | p5
Constitution Act Amendment Act 1922 (Qld)
Significance
This document is the Bill passed by both Houses of the Queensland Parliament on 3 November 1921. It was reserved for the Royal Assent of King George V by the Governor on 5 November. The Act was proclaimed on 23 March 1922, ending the 63-year history of the Queensland Legislative Council.

The abolition of the Upper House of the Legislative Council in 1922 makes Queensland's Parliament the only Australian single-chamber legislature.

History
On 1 May 1860, Governor Sir William Denison of New South Wales appointed the first 11 members of the Queensland Legislative Council for five-year terms. Subsequent appointments were made for life. The number of members was expanded to 15 later in the month by Queensland's first Governor, Sir George Ferguson Bowen.

The Queensland Legislative Council, as a non-elected body, represented conservative and at times, reactionary, policies reflecting the interests of wealth and privilege. In the other Australian colonial parliaments, significant cooperation either occurred between the two Houses of Parliament, or some workable method of resolving deadlocks within a bicameral system existed. In Queensland no such flexibility was evident.

A cautious and potentially obstructionist Upper House confronted Queensland's first majority Labor Government in 1915. That Government was intent upon a robust program of social and economic reform – the stage was set for confrontation and high political drama. Between 1915 and 1920, the political process repeatedly ground to a halt over an escalating dispute about the powers of the respective Houses.

To ringing cheers from the Government benches in the Legislative Assembly, in November 1915 Premier Ryan announced the introduction of a Bill to amend the Constitution by abolishing the Legislative Council. Between this moment and the passage of the 1922 Act lay a tense struggle. In the end, the Legislative Council went quietly, after the elevation of some 30 Government appointees to its ranks between October 1917 and March 1920. The second reading of the Constitution Act Amendment Bill of 1921 was eventually carried without amendment, by 28 votes to 10, on 26 October 1921 and the Bill was passed on 3 November 1921.

After the Conservative Moore Ministry in 1931 made a half-hearted attempt at resurrection, the succeeding Labor regime of William Forgan Smith passed the Constitution Act Amendment Act 1934, preventing the life of any Parliament extending beyond three years and ensuring that, except via referendum, an Upper House could never be revived in Queensland. 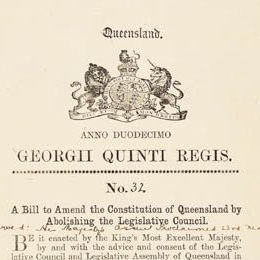 Detail from front cover of the Constitution Act Amendment Act 1922 (Qld) showing the crest and full title of the Bill.