View scans
p1 | p2 | p3
University of Sydney Act 1850 (NSW)
Significance
This document, signed on 1 October 1850, laid the foundation of a key institution of civil society. As New South Wales evolved from a penal colony, demand increased for the skills and knowledge to support the institutions of self-government, as well as to train professionals and to enrich the local culture (though the university, like those that followed, was modelled on British traditions).
History
In the 1840s, New South Wales had ceased to be a penal colony, and the rudiments of a democratic legislature meant that a movement towards responsible government had begun.

In 1848, in the Legislative Council, William Charles Wentworth proposed a scheme for the evolution of the existing Sydney College into a university. In Wentworth's eyes, a state university, secular and open to all, was essential for the growth of a self-governing society. It would, he argued, provide the opportunity for 'the child of every class, to become great and useful in the destinies of his country'. A parliamentary select committee was set up to investigate the proposal, and it reported favourably. It took two attempts on Wentworth's behalf, however, before the scheme was adopted, and the Act endowing the University of Sydney was passed.

The University was inaugurated in October 1852 and, by 1859, the move to its permanent site was completed. In 1858 the University was included in the Electoral Act, which provided for it to become a constituency for the Legislative Assembly as soon as there were 100 graduates with higher degrees. This seat in Parliament was first filled in 1876, but was abolished in 1880 one year after its second Member, Edmund Barton, was elected to the Legislative Assembly. 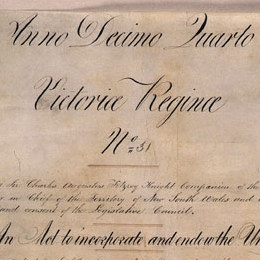 Detail showing the ornate heading from the first page of the University of Sydney Act 1850 (NSW).