View scans
title | contents | p122
Mabo v Queensland No. 2 1992 (Cth)
Significance
The judgments of the High Court in the Mabo case inserted the legal doctrine of native title into Australian law. In recognising the traditional rights of the Meriam people to their islands in the eastern Torres Strait, the Court also held that native title existed for all Indigenous people in Australia prior to Cook's Instructions and the establishment of the British Colony of New South Wales in 1788. This decision altered the foundation of land law in Australia.

The new doctrine of native title replaced a 17th century doctrine of terra nullius (no-one's land) on which British claims to possession of Australia were based. The Mabo decision thus solved the problem posed by the Gove Land Rights Case in 1971, which followed the 'legal fiction' of terra nullius. In recognising that Indigenous people in Australia had a prior title to land taken by the Crown since Cook's declaration of possession in 1770, the Court held that this title exists today in any portion of land where it has not legally been extinguished.
History
On 20 May 1982, Eddie Koiki Mabo, Sam Passi, David Passi, Celuia Mapo Salee and James Rice began their legal claim for ownership of their lands on the island of Mer in the Torres Strait between Australia and Papua New Guinea. The High Court required the Supreme Court of Queensland to determine the facts on which the case was based but while the case was with the Queensland Court, the State Parliament passed the Torres Strait Islands Coastal Islands Act which stated 'Any rights that Torres Strait Islanders had to land after the claim of sovereignty in 1879 is hereby extinguished without compensation'.

The challenge to this legislation was taken to the High Court and the decision in this case, known as Mabo No. 1, was that the Act was in conflict with the Commonwealth Racial Discrimination Act 1975 and was thus invalid.

It was not until 3 June 1992 that Mabo No. 2 was decided. By then, 10 years after the case opened, both Celuia Mapo Salee and Eddie Mabo had died.

Six of the judges agreed that the Meriam people did have traditional ownership of their land, with Justice Dawson dissenting from the majority judgment. The judges held that British possession had not eliminated their title and that 'the Meriam people are entitled as against the whole world to possession, occupation, use and enjoyment of the lands of the Murray Islands'.

Following the High Court decision in Mabo No. 2, the Commonwealth Parliament passed the Native Title Act in 1993, enabling Indigenous people throughout Australia to claim traditional rights to unalienated land.

These pages from the judgment of Justice Gerard Brennan, with his signature, represent not only this lengthy judgment, but the substantial set of documents which comprise the majority judgments of six of the seven judges of the full High Court, who together decided this case.

The Order of the High Court advised the decision, but it is the reasoning expressed in the majority judgments which shapes the law in a judicial case. The judges formally and literally hand down their written judgments with the words 'I publish my reasons' and a court official takes these original signed documents to the Court Registry where they are recorded and kept. The signed majority judgments together are thus the instrument which in this case effected a major change in Australian constitutional development.

The majority judgments in full are the largest, and perhaps also the plainest in appearance, of Australia's key constitutional documents. These six judgments in the Mabo case comprise hundreds of pages, of which just three pages are shown here. The full judgments are available online. 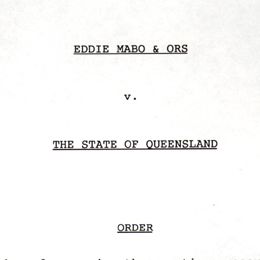 Detail from the cover of the Mabo v Queensland document.