The Act retained the concept of 'aliens', defining this as all those who are not British subjects, excepting Irish citizens and 'protected persons' within the British Commonwealth.
History
Before Federation in 1901, formal expressions of citizenship followed the processes of self-government in each of the Australian colonies, so that in general, the constitution of each colonial government in relation to Britain directed the form of citizenship practised.

The Federal Council, set up by some of the Australian colonies before Federation to advance issues of joint interest, had in 1897 drafted an Australasian Naturalisation Act enabling Europeans naturalised in any colony to have this status in every other colony. This provision was adapted in Sections 34 and 51.xx of the Australian Constitution Act 1900. The Commonwealth then passed the Naturalisation Act 1903 which followed this principle, excluding Aboriginal people as well as people from Asian countries from recognition. The Commonwealth Nationality Act in 1920 consolidated all relevant decisions to that date, thus embedding the concept of naturalised Australians sharing the same rights and relations to government as the natural-born Australians – a concept which strikingly avoided the issues of the standing of Indigenous Australians. This Act introduced the term 'alien' to refer to all those outside the group of naturalised and natural-born citizens.

Immigration policies after the 1939–45 war raised the need to define Australian citizenship in law. The re-settlement throughout the British Commonwealth of large numbers of non-British born people, both refugees from eastern European countries and immigrants from countries such as Italy and Greece, raised concern about how well these people would belong to their new countries and relate to their new governments. A conference of the Prime Ministers of countries of the British Commonwealth in 1946 determined that each country of the Commonwealth would define a specific citizenship while all citizens would remain British subjects. The Parliaments of Canada, New Zealand, and then Australia passed legislation implementing this decision.

The idea of Australian citizenship implicit in the Act was thus one primarily shaped by British law, culture and traditions, rather than by those of Australia's indigenous people and all others who had made their home in Australia since 1788. Unlike the Australian Constitution Act, and legislation since, the Nationality and Citizenship Act did not discriminate against Indigenous people, implicitly including them through the more logical use of the term 'natural-born'. Aboriginal people finally won the right to vote in Federal elections in 1962, and the success of the referendum in 1967 altered those sections of the Australian Constitution with discriminatory effect.


Description
This document is in the form of a booklet, plain in appearance, with the Commonwealth Coat of Arms on the cover. The signatures of the Governor-General, Sir William McKell, and the Clerk of the House of Representatives are on page 19. The date of assent, 21 December 1948, is written on this page and on the cover. 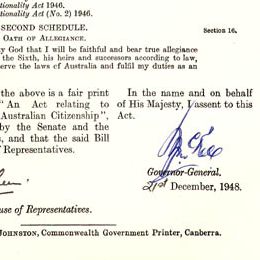 Detail showing the signiture of the Govenor-General.