The Letters Patent were read out to the assembled crowds at the inauguration ceremony in Centennial Park, Sydney, on 1 January 1901 when Lord Hopetoun took office.

Eastman, David, (comp.), The Founding Documents of the Commonwealth of Australia, Canberra, 1994.

This document is two large parchment pages with a border around the top and sides of both pages showing the Royal Coat of Arms, and figures representing Justice, Defence, Agriculture and Science, and Mercy, and two supporting angels.

Queen Victoria's seal, inscribed with the Royal style and title Victoria Dei Gratia Britt Regina Fid def ind imp (Victoria by the Grace of God of the United Kingdom of Great Britain and Ireland, Queen, Defender of the Faith, Empress of India), is attached to the second page of the letter by a cord, and housed in a round black shellacked metal case, 15.5 cm in diameter.

The whole is housed in a wooden box covered with red leather. The centre of the lid bears the royal coat of arms embossed in gold. The box is lined with royal purple velvet. 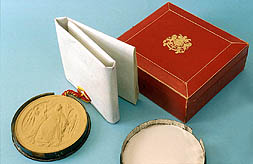 Detail of Queen Victoria's seal and the box in which it is housed.