View scans
p1 | p2 | p3 | p4 | p5 | p6 | p7 | p8 | p9 | p10 | p11 | p12 | p13 | p14 | p15 | p16 | p17 | p18 | p19 | p20 | p21 | p22
Pitjantjatjara Land Rights Act 1981 (SA)
Significance
The Pitjantjatjara people, whose lands in Central Australia extend into Western Australia and the Northern Territory, considered the concept of land title in the Lands Trust Act inadequate for their traditional lands. A Parliamentary Select Committee reported in 1979 in favour of an Act giving total rights over their traditional land in the north west of South Australia.
History
This legislation, recognising the traditional rights of the Pitjantjatjara people to their lands, was introduced by the Government of Don Dunstan. A change of Government occurred while the Bill was before the House and there were fears it would be abandoned, but the new Liberal Government eventually re-negotiated the matter to the satisfaction of the people involved. The law received Assent on 19 March 1981. The legislation gave rights well in advance of any where else in Australia. A more limited title was granted in the Northern Territory, where the passage of the Commonwealth Aboriginal Land Rights Act in 1976 granted rights to land, based on traditional association. In 1984 similar legislation was passed under a Labor Government conferring ownership of traditional lands on the Maralinga Tjarutja people. 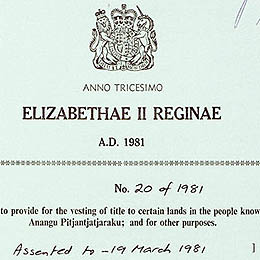 Detail from the title page of the Pitjantjatjara Land Rights Act 1981 (SA).